You can find the V4 code here.

Based on the "Error Handling" category.
Alternatively, view Airbrake alternatives based on common mentions on social networks and blogs.

Do you think we are missing an alternative of Airbrake or a related project?

Airbrake is an online tool that provides robust exception tracking in any of your Ruby applications. In doing so, it allows you to easily review errors, tie an error to an individual piece of code, and trace the cause back to recent changes. The Airbrake dashboard provides easy categorization, searching, and prioritization of exceptions so that when errors occur, your team can quickly determine the root cause. 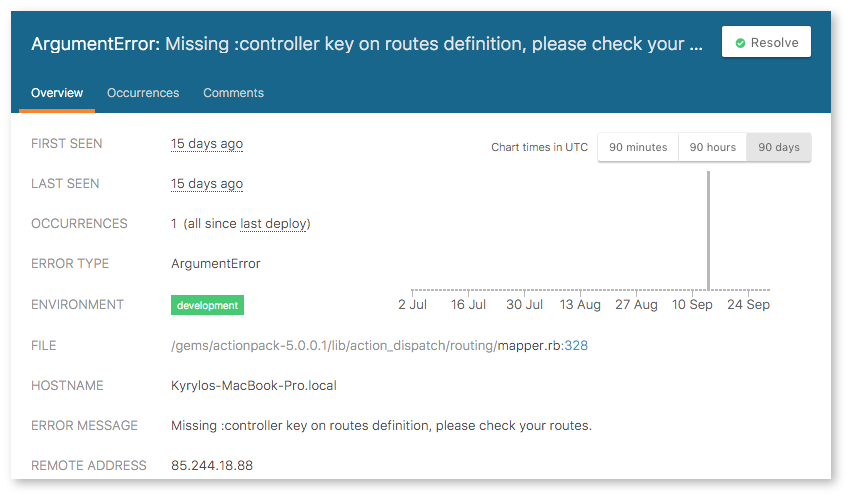 This library is built on top of Airbrake Ruby. The difference between Airbrake and Airbrake Ruby is that the airbrake gem is just a collection of integrations with frameworks or other libraries. The airbrake-ruby gem is the core library that performs exception sending and other heavy lifting.

Normally, you just need to depend on this gem, select the integration you are interested in and follow the instructions for it. If you develop a pure frameworkless Ruby application or embed Ruby and don't need any of the listed integrations, you can depend on the airbrake-ruby gem and ignore this gem entirely.

The list of integrations that are available in this gem includes:

Add the Airbrake gem to your Gemfile:

Invoke the following command from your terminal:

This command will generate the Airbrake configuration file under config/initializers/airbrake.rb. Make sure that this file is checked into your version control system. This is enough to start Airbraking.

In order to configure the library according to your needs, open up the file and edit it. The full list of supported configuration options is available online.

To test the integration, invoke a special Rake task that we provide:

In case of success, a test exception should appear in your dashboard.

The library sends all uncaught exceptions automatically, attaching the maximum possible amount information that can help you to debug errors. The Airbrake gem is capable of reporting information about the currently logged in user (id, email, username, etc.), if you use an authentication library such as Devise. The library also provides a special API for manual error reporting. The description of the API is available online.

If you want to reuse Rails.application.config.filter_parameters in Airbrake you can configure your notifier the following way:

There are a few important details:

Consult the example application, which was created to show how to configure filter_parameters.

The dot notation introduced in rails/pull/13897 for filter_parameters (e.g. a key like credit_card.code) is unsupported for performance reasons. Instead, simply specify the code key. If you have a strong opinion on this, leave a comment in the dedicated issue.

In new Rails apps, by default, all the Airbrake logs are written into log/airbrake.log. In older versions we used to write to wherever Rails.logger writes. If you wish to upgrade your app to the new behaviour, please configure your logger the following way:

To use Airbrake with Sinatra, simply require the gem, configure it and use our Rack middleware.

To run the app, add a file called config.ru to the same directory and invoke rackup from your console.

That's all! Now you can send a test request to localhost:9292 and check your project's dashboard for a new error.

To send exceptions to Airbrake from any Rack application, simply use our Rack middleware, and configure the notifier.

Note: be aware that by default the library doesn't filter any parameters, including user passwords. To filter out passwords add a filter.

If you want to append additional information from web requests (such as HTTP headers), define a special filter such as:

The notice object carries a real Rack::Request object in its stash. Rack requests will always be accessible through the :rack_request stash key.

The library comes with optional predefined builders listed below.

RequestBodyFilter appends Rack request body to the notice. It accepts a length argument, which tells the filter how many bytes to read from the body.

You can redefine how many bytes to read by passing an Integer argument to the filter. For example, read up to 512 bytes:

For every route in your app Airbrake collects performance breakdown statistics. If you need to monitor a specific operation, you can capture your own breakdown:

That will benchmark call_operation and send performance information to Airbrake, to the corresponding route (under the 'operation name' label).

Alternatively, you can measure performance of a specific method:

Similarly to the previous example, performance information of the index method will be sent to Airbrake.

We support Sidekiq v2+. The configurations steps for them are identical. Simply require our integration and you're done:

If you required Sidekiq before Airbrake, then you don't even have to require anything manually and it should just work out-of-box.

By default, Airbrake notifies of all errors, including reoccurring errors during a retry attempt. To filter out these errors and only get notified when Sidekiq has exhausted its retries you can add the RetryableJobsFilter:

The filter accepts an optional max_retries parameter. When set, it configures the amount of allowed job retries that won't trigger an Airbrake notification. Normally, this parameter is configured by the job itself but this setting takes the highest precedence and forces the value upon all jobs, so be careful when you use it. By default, it's not set.

No additional configuration is needed. Simply ensure that you have configured your Airbrake notifier with your queue adapter.

If you're working with Resque in the context of a Rails application, create a new initializer in config/initializers/resque.rb with the following content:

Now you're all set.

Any Ruby app using Resque can be integrated with Airbrake. If you can require the Airbrake gem after Resque, then there's no need to require airbrake/resque anymore:

If you're unsure, just configure it similar to the Rails approach. If you use multiple backends, then continue reading the needed configuration steps in the Resque wiki (it's fairly straightforward).

If you required DelayedJob before Airbrake, then you don't even have to require anything manually and it should just work out-of-box.

If you required Shoryuken before Airbrake, then you don't even have to require anything manually and it should just work out-of-box.

If you required Sneakers before Airbrake, then you don't even have to require anything manually and it should just work out-of-box.

Airbrake offers Rake tasks integration, which is used by our Rails integration[link]. To integrate Airbrake in any project, just require the gem in your Rakefile, if it hasn't been required and configure the notifier.

If you want to convert your log messages to Airbrake errors, you can use our integration with Ruby's Logger class from stdlib. All you need to do is to wrap your logger in Airbrake's decorator class:

Now you can use the logger object exactly the same way you use it. For example, calling fatal on it will both log your message and send it to the Airbrake dashboard:

The Logger class will attempt to utilize the default Airbrake notifier to deliver messages. It's possible to redefine it via #airbrake_notifier:

In order to reduce the noise from the Logger integration it's possible to configure Airbrake severity level. For example, if you want to send only fatal messages from Logger, then configure it as follows:

By default, airbrake_level is set to Logger::WARN, which means it sends warnings, errors and fatal error messages to Airbrake.

In order to configure a production logger with Airbrake integration, simply overwrite Rails.logger with a wrapped logger in an after_initialize callback:

By default, the library collects Rails SQL performance stats. For standard Rails apps no extra configuration is needed. However if your app uses Rails engines, you need to take an additional step to make sure that the file and line information is present for queries being executed in the engine code.

Specifically, you need to make sure that your Rails.backtrace_cleaner has a silencer that doesn't silence engine code (will be silenced by default). For example, if your engine is called blorgh and its main directory is in the root of your project, you need to extend the default silencer provided with Rails and add the path to your engine:

Airbrake supports any type of Ruby applications including plain Ruby scripts. If you want to integrate your script with Airbrake, you don't have to use this gem. The Airbrake Ruby gem provides all the needed tooling.

By notifying Airbrake of your application deployments, all errors are resolved when a deploy occurs, so that you'll be notified again about any errors that reoccur after a deployment. Additionally, it's possible to review the errors in Airbrake that occurred before and after a deploy.

There are several ways to integrate deployment tracking with your application, that are described below.

The library supports Capistrano v2 and Capistrano v3. In order to configure deploy tracking with Capistrano simply require our integration from your Capfile:

If you use Capistrano 3, define the after :finished hook, which executes the deploy notification task (Capistrano 2 doesn't require this step).

If you version your application, you can set the :app_version variable in config/deploy.rb, so that information will be attached to your deploy.

A Rake task can accept several arguments shown in the table below:

Make sure to require the library Rake integration in your Rakefile.

Then, invoke it like shown in the example for Rails.

In case you have a problem, question or a bug report, feel free to:

The project uses the MIT License. See LICENSE.md for details.

In order to run the test suite, first of all, clone the repo, and install dependencies with Bundler.

In order to test integrations with frameworks and other libraries, install their dependencies with help of the following command:

To run integration tests for a specific framework, use the appraisal command.

Pro tip: [GitHub Actions config](/.github/workflows/test.yml) has the list of all the integration tests and commands to invoke them.


*Note that all licence references and agreements mentioned in the Airbrake README section above are relevant to that project's source code only.