The primary GOAL of this project is to improve performance in the most heavily used areas of Ruby as path relation and file lookup is currently a huge bottleneck in performance. As this is the case the path performance updates will likely not be limited to just changing the Pathname class but also will be offering changes in related methods and classes.

Users will have the option to write their apps directly for this library, or they can choose to either refine or monkeypatch the existing standard library. Refinements are narrowed to scope and monkeypatching will be a sledge hammer ;-)

Based on the "Misc" category.
Alternatively, view FasterPath alternatives based on common mentions on social networks and blogs.

Do you think we are missing an alternative of FasterPath or a related project?

This gem shaves off more than 30% of my Rails application page load time.

The primary GOAL of this project is to improve performance in the most heavily used areas of Ruby as path relation and file lookup is currently a huge bottleneck in performance. As this is the case the path performance updates will likely not be limited to just changing the Pathname class but also will be offering changes in related methods and classes.

Users will have the option to write their apps directly for this library, or they can choose to either refine or monkeypatch the existing standard library. Refinements are narrowed to scope and monkeypatching will be a sledge hammer ;-)

I read a blog post about the new Sprockets 3.0 series being faster than the 2.0 series so I tried it out. It was not faster but rather it made my website take 31.8% longer to load. So I reverted back to the 2.0 series and I did a check on Rails on what methods were being called the most and where the application spends most of its time. It turns out roughly 80% (as far as I can tell) of the time spent and calls made are file Path handling. This is shocking, but it only gets worse when handling assets. That is why we need to deal with these load heavy methods in the most efficient manner!

Here's a snippet of a Rails stack profile with some of the most used and time expensive methods.

Here are some additional stats. From Rails loading to my home page, these methods are called (not directly, Rails & gems call them) this many times. And the home page has minimal content.

After digging further I've found that Pathname is heavily used in Sprockets 2 but in Sprockets 3 they switched to calling Ruby's faster methods from File#initialize and Dir#each. It appears they've written all of the path handling on top of these themselves in Ruby. They achieved some performance gain by switching to rawer code methods, but then they lost more than that in performance by the many method calls built on top of that.

If you want to see the best results in Rails with this gem you will likely need to be using the Sprockets 2.0 series. Otherwise this library would need to rewrite Sprockets itself.

I've said this about Sprockets but this required two other gems to be updated as well. These are the gems and versions I upgraded and consider group 1 (Sprockets 2) and group 2 (Sprockets 3). My data is based on method calls rather than source code.

The headline for the amount for improvement on this library is specific to only the improvement made with the method chop_basename. Just so you know; in my initial release I had a bug in which that method immediately returned nothing. Now the good thing about this is that it gave me some very valuable information. First I found that all my Rails site tests still passed. Second I found that all my assets no longer loaded in the website. And third, and most importantly, I found my Rails web pages loaded just more than 66% faster without the cost of time that chop_basename took.

That's right; the path handling for assets in your website *consumes more than 2/3rds of your websites page load time.

So now we have some real numbers to work with We can be generoues and use 66% as our margin of area to improve over (for chop_basename specifically, not counting the benefit from improving the performance in other file path related methods). That means we want to remove as much of that percentage from the overall systems page load time. The original headline boasts over 33% performance improvement — that was when chop_basename was improved by just over 50%. Now chop_basename is improved by 83.4%. That alone should make your site run 55.044% faster now (given your performance profile stats are similar to mine).

What Rails Versions Will This Apply To?

As mentioned earlier Sprockets, which handles assets, changed away from using Pathname at all when moving from major version 2 to 3. So if you're using Sprockets 3 or later you won't reap the biggest performance rewards from using this gem for now (it's my goal to have this project become a core feature that Rails depends on and yes… that's a big ask). That is unless you write you're own implementation to re-integrate the use of Pathname and FasterPath into your asset handling library. For now just know that the Sprockets 2 series primarily works with Rails 4.1 and earlier. It may work in later Rails versions but I have not investigated this. 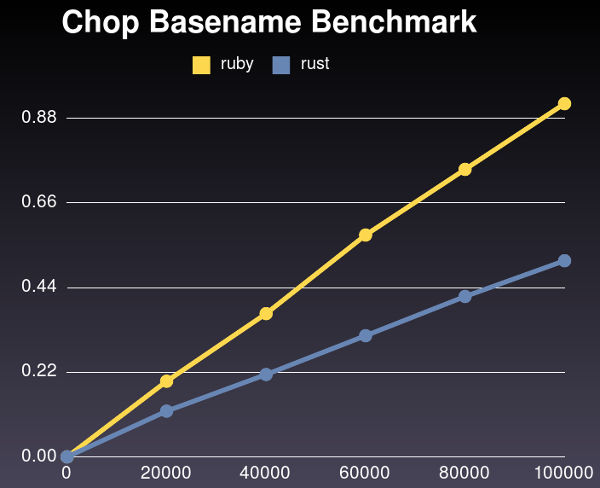 Add the proper require to your project.

You may choose to use the methods directly, or scope change to rewrite behavior on the standard library with the included refinements, or even call a method to monkeypatch everything everywhere.

For the scoped refinements you will need to

And for the sledgehammer of monkey patching you can do

These are stable, not performant, and not included in Pathname by default.

These will not be included by default in monkey-patches. To try them with monkeypatching use the environment flag of WITH_REGRESSION. These methods are here to be improved upon.

It's been my observation (and some others) that the Rust implementation of the C code for File has similar results but performance seems to vary based on CPU cache on possibly 64bit/32bit system environments. These are not included by default when the monkey patch method FasterPath.sledgehammer_everything! is executed.

Getting Started with Development

The primary methods to target are mostly listed in the Why section above. You may find the Ruby source code useful for Pathname's Ruby source, C source, tests, and checkout the documentation.

Methods will be written as exclusively in Rust as possible. Even just writing a not in Ruby with a Rust method like !absolute? (not absolute) drops 39% of the performance already gained in Rust. Whenever feasible implement it in Rust.

After checking out the repo, make sure you have Rust installed, then run bundle. Run rake test to run the tests, and rake bench for benchmarks.

FasterPath is tested with The Ruby Spec Suite to ensure it is compatible with the native implementation, and also has its own test suite testing its monkey-patching and refinements functionality.

To run an individual test or benchmark from FasterPath's own suite:

To run an individual ruby spec test, run mspec with a path relative to spec/ruby_spec, e.g.:

Bug reports and pull requests are welcome on GitHub at https://github.com/danielpclark/faster_path.

MIT License or APACHE 2.0 at your pleasure.


*Note that all licence references and agreements mentioned in the FasterPath README section above are relevant to that project's source code only.